According to the National Institute on Alcohol Abuse and Alcoholism currently there are approximately about 18 million people in the United States who have an alcohol dependence more commonly referred to as alcoholism. Alcohol is a depressant although some people tend to think it is a stimulant. Being a depressant the effect that the alcohol has on a person’s brain is that it depresses the functions of the central nervous system. This could explain why one of the major psychological effects of alcohol on the brain is depression. It seems as though depression goes hand in hand with the abuse of alcohol.

One of the most common effects of alcoholism is suicide. Alcoholics ranked among the highest percentages for those who attempt and succeed in committing suicide. Alcoholics use the alcohol, as a way to self medicate in order to deal with the stresses and strains of everyday life and coupled with the fact that it is a depressant, the psychological effects are very troubling. You need to seek treatment for your alcoholism if you have even had any thought of hurting yourself. 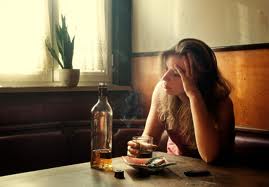 Alcohol is a depressant, and it can contribute to depression.

Some additional side effects:

Denial is an effect that is very common among the person who has been drinking for a long period of time. They are convinced that they are able to stop drinking at any time and they have a way of convincing those around them that they can accomplish that as well. This can be dangerous as a person who is in denial may desperately need help but are unable to get it because they believe they don’t need it. Being in a state of denial, the person will continue the alcohol and the long-term over-consumption of alcohol will cause damage to the body and mind.

While the psychological effects of alcohol are great and can place a person that continues to abuse alcohol in grave danger, another area that is affected is the effect is has on family and friends. There may be incidents of family violence; even issues where family or friends may suffer physical or sexual abuse and neglect which could lead to their own psychological issues. Risky behavior that is associated with the abuse of alcohol could result in accidents or injuries while the person is under the influence. It is so important to take that much needed step toward getting treatment for this disorder, as the impact on your life can be devastating.