Most people expect alcohol to be served or least made available at dinners, parties, work functions and social gatherings. While most people can have the occasional two or three drinks with little to no repercussions, some may have difficulty managing their alcohol intake.

Knowing when drinking behaviors have crossed over from casual to moderate to heavy consumption can be difficult for someone who’s susceptible to alcohol abuse. While physical symptoms of alcohol abuse can affect most anyone who’s “tied one on” the night before, symptoms can just as easily persist for days and weeks in someone with a drinking problem.

Alcoholism develops in stages with physical symptoms of alcohol abuse becoming more pronounced along the way. As withdrawal effects can develop in most anyone, the longer these effects last the more likely a person has entered into the advanced stages of alcohol abuse. 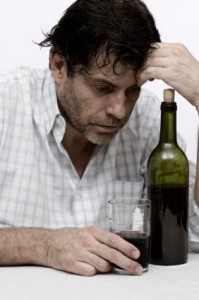 Alcohol abuse can cause a person to look disheveled and unkempt in appearance.

For someone susceptible to alcoholism, the stages of alcohol abuse typically unfold according to a certain progression –

According to Keystone College, these stages reflect the damaging effects of alcohol on brain function. With each successive drink, brain cells become less responsive to alcohol’s effects, which results in increasing tolerance levels.

With continued use, brain cells lose their ability to regulate chemical processes without alcohol’s effects, at which point a physical dependency has developed. The combined effects of increasing tolerance levels and physical dependency dictate the amount of alcohol a person drinks at any one setting so he or she drinks until the brain’s requirements have been met.

Over time, alcohol’s ongoing effects essentially warp a person’s perceptions and believe systems to the point where alcohol becomes a primary motivation in his or her life. Persistent cravings for alcohol drive much of what a person thinks about, plans for and does.

Withdrawal effects may take the form of –

These effects can persist for a day or last for weeks depending on the severity of a person’s drinking problem.

The longer a person abuses alcohol the greater the damage done to brain functions. Likewise, the types of symptoms experienced become increasingly more severe as damage to the brain progresses.

According to the University of Southern Indiana, early stage symptoms of alcohol abuse include –